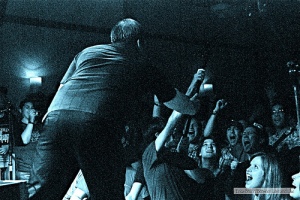 To say The Wrens come to town only every once in a blue moon would be a discredit to the frequency of blue moons.  A more apt metaphor would be that The Wrens seem to come to town about as frequently as Halley’s Comet.  And, for some of the diehards who packed Schubas on Friday and Saturday (to quote one fan on Friday night, when asked if he was going to both shows, “…Why would you even ask?”) the Wrens shows packed more shock and awe into one weekend than any celestial traveling body could ever hope to match.

But, for all their hardships, these difficulties in the band’s past that serve to be one of the many things that endear us to this New Jersey foursome.  We curse the studio big-wigs for their seven year record hiatus (never you mind that it’s been another 6 year since The Meadowlands revived their musical career), we scream along in glee as Charles sings, “I’ve walked away from more than you imagine and I sleep just fine,” telling ourselves we can mirror the intensity of a seven year musical hibernation of sorts on the heels of rejecting a million dollar record contract (to be eventually taken by Creed.  Fuck.  Creed.)  And we love them for the energy they can still put into each and every one of their shows.

The Wrens history of pratfalls and stutters created the perfect storm for the quintessential Indie Rock concert experience.  Spread across Philadelphia, New York, and New Jersey, most still working their day jobs (I spotted Wrens drummer Jerry MacDonald walking around downtown Chicago before Friday’s, arriving in the city early for his job), the band rarely gets to practice their discography.  During a soundcheck for a 2006 concert at Northwestern University, where the band played three full songs, lead singer/guitarist Charles Bissell remarked to me, “We don’t ever get to play together, so we basically use our concerts to practice.”

The end result is a live band full of excitement, spontaneity, and pure joy in their craft.  High-octane yet not overbearing, sloppy but not messy, and unique while remaining faithful to each song’s recorded brethren, when The Wrens play a concert, it ranges from what my friend Mat (who had never even listened to The Meadowlands until the previous week) called, “probably the best concert I have been to in my life,” to pure, life-affirming, catharsis.  If you enter a Wrens concert embittered and broken down, after two hours of screaming along with the band and hundreds of fans to the likes of epically crafted live renditions of “Hopeless”, “Happy”, and the like, all the worries in the world seem to have melted away.  You’re so relaxed you feel like you just got a full-body massage, only you’re sweaty and can’t get yourself to fall asleep for a while.  So, really, I guess it’s like getting a full-body massage if you know which places in Chinatown to go to.

These two Schubas concerts, the band’s first appearance in Chicago since playing the Belmont Arts Music Festival, in late summer of 2007, gave us just about all the songs the audience wanted to hear, some loved tracks they didn’t expect to hear, and a sizeable handful of new songs that gave the fans a break from singing along wildly to each number in the set (though by day 2, a handful of fans were able to sing-a-long with the new choruses).  The sets on both nights started as the house speakers blared the short demo of vocalist/pianist/bassist Kevin Whelan’s “Z” (Because, when you’ve recorded a hundred demos in preparation for a new album, you don’t have much recourse but to call all the songs by letters and numbers.  That’s not even a joke.) before launching into their songs (on the first night, it was a new song sung by Kevin, and on night two, you got to hear “I Guess We’re Done” sung from one cell phone to another, pressed to a guitar).

The older songs, almost entirely from 2003’s The Meadowlands, with the occasional selection from 1996’s Secaucus, were played with typical Wrens flair.  Longer than the album versions (with a few exceptions, such as their amped-up, double-time version of “Per Second Second”) the band built a wall of impenetrable indie rock as the band danced around on stage with the energy of teenagers, and the audience exerted themselves by jumping up and down, clapping along, and pumping their fists in the air, abandoning any attempt at hipster indifference.  For the front half of the audience, you could not find the concert goers nodding along silently, casting judgmental glances at the two Swedish kids up front convulsing to the music like dismembered army ants.  Instead, these Jersey rockers in their 40’s (except for Kevin, the baby of the group in his late 30’s) were greeted by a sea of Chicagoans leaping about, faces twisted in anguish and ecstasy.  Though I’m sure I’m exaggerating slightly.

The newer music, not entirely completed yet, was primarily sung by Kevin on piano (until the band figure out a different instrumental arrangement for them) and ranged from “enjoyable” to “holy shit, this song, holy shit.”  *insert standard question of “when will we get to hear these songs on a new album” from the fan base*

The two sets differed slightly between the two nights, primarily due to preparation.  Not knowing that the audience would not be content with just one encore performance (we reserve those standard, scripted, “everyone-knows-what’s-coming” encores for mere mortals), the band ran out of songs to play, as Charles responded to the various cries of concert goers asking for songs that haven’t been performed in years with a self-effacing, “Trust me, you don’t want to hear us try to play that,” before offering the rowdy crowd an olive branch in the form of an offering from Secaucus’s “I’ve Made Enough Friends.”  After vocalist/keyboardist/bassist Kevin Whelan left the stage, saying, “I don’t know any more songs!” Charles gave us one last taste of the band with his new demo, The Thousand Do’s, with guitarist Greg Whelan adding layers with some slightly improvised guitar work.  The fans were screaming, hands in their hair, tearing at their clothes, openly weeping and…okay, well actually, they just let it lie at two encores, and wandered towards the merch table in a rocked-out daze.

The Wrens were ready for the next day, having soundchecked “Surprise, Honeycomb” (which actually was the first song I ever heard by the Wrens that I fell in love with upon the first listen) from Secaucus, and Napiers from 1994’s Silver, which they played on their second encore for Saturday’s set.  Unlike Friday, the Schubas crew assumed the band was done after one encore.  The lights came up.  Music was played over the PAs. No one moved a muscle.  Five minutes of frantic applause, the occasional chanting “WRENS!   WRENS!  WRENS!  WRENS!”, Thax Douglas standing by the venue’s side door, gesturing wildly for the band to come in, before finally the band re-entered to the surprise of the sound engineers, who had shut off the microphones.

The most notable difference of Saturday’s performance was the band’s exclusion of “Boys You Won’t,” which Friday night saw Jerry urging the audience to come up on stage to hammer on the stage with drumsticks throughout the song saying, “This is the last time we’re doing this so take advantage of it.”  This particular gimmick is one I’ve seen at every other Wrens show I’ve attended, and one which I’ve seen people adore or despise.  Those who love it likely have been on stage for it, but those who complain don’t appreciate what the track entails for the band.  The Wrens went through years assuming they were no longer a band- the song “I Guess We’re Done” was an almost bittersweet premature obituary for the band, while “Boys You Won’t” was…well essentially about making “I Guess We’re Done”.

The Wrens are a rare band that is so surprised by the level of fandom they inspire that they treat every fan, no matter how aggressive, obnoxious, or stalkery (cough, cough, uh…not that I’m talking about myself) as if they are a blessing.  A gift.  A reminder of why they do what they do.  And so they share their songs with everyone in the audience.  On Friday, during Kevin’s rendition of “This is Not What You Had Planned,” Kevin gleefully screamed, “No one fucking sings better than the Midwest!” before holding out the microphone stand to catch our yells.  They reach down into the audience and tell random fans “play whatever black keys on the piano you want” to add texture to “The House That Guilt Built.”  And yes, Jerry will leave his drum set with a shopping bag full of drumsticks for enough fans to go onstage that the band can hardly navigate the cramped, tiny location.

They shrugged as I took advantage of their “Fifth Wren” promotion from two years ago, and let me come on stage and play piano for the closing half of “Hopeless” and “She Sends Kisses” (I’m amazed I was able to hold back that fact as long as I had in this review), simply because I emailed the band and asked, they let me “play” my first ever rock show.

By Saturday, Kevin, walking from the piano just before the final chorus of “Hopeless”, and screamed in my ear, “Play whatever you fucking want!” before, seeing me singing with the song, grabbing me by the shoulders and directing me to his mic for the final chorus, us both screaming at the top of our lungs.  As I leapt on stage during “She Sends Kisses”, following the final pickup of the song after an extended silence where the entire audience sang the chorus (only messing up the lyrics at the end) in preparation for what was to come, I leapt in the air, coming down on my piano notes.  I looked around to see the band mirroring me with their own stage leaps, their genuine enjoyment matching my nervous excitement as if they were playing onstage with their favorite band in the world as well.  As Kevin directed me to scream “THANK YOU!” into the microphone as the music died down, it didn’t seem out of place.  No one in the crowd batted an eye.  As if every one of us had been on stage the whole time.  And in a way, through the energy shared by the entire crowd, we had.

In person, The Wrens are the nicest guys you can ever meet (that’s not flattery, literally everyone I have met who has had a conversation with any one of the band members has used those exact words to describe each member of the band).  On stage, they become something bigger than themselves, or even their craft.  They make us all feel like rock stars.