Five Bands I Like That Make You Question My Music Tastes

Now, you all are no doubt aware that I’m a pretty classy guy with the finest tastes imaginable.  I eat the finest caviar paired with only the perfectly matched bottle of Champagne, I only watch films directed by The Coen Brothers, David Lynch, and Wes Anderson, and I employ the most attractive and disease-free hookers for my weekly erotic asphyxiations.  All of my underwear is made of silk created by a now-extinct worm, I live in a house that has more elaborate Victorian Era fountains than bedrooms, and my diet consists primarily of flavorless, odorless gold.  And of course, I listen to all of the best bands you’ve never heard of until I’ve deemed you worthy of knowing about them. 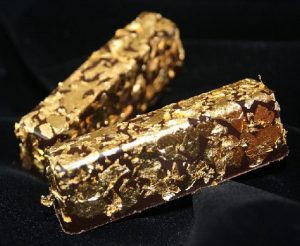 Yummmm…this tastes as rare as that Japanese Noise-Drone-Spazz-Core EP I just bought.

But even I have my flaws.  And despite my exquisite tastes in everything, especially music, I listen to some bands that will make you say, “This guy is full of shit.  I bet his house doesn’t even have two Victorian Era fountains.”  Below are five of those bands. 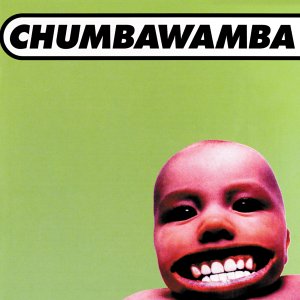 How You Know Them:

“Tubthumping”- i.e. that “I Get Knocked Down” song

“I’m sorry for your loss.  Hey, have you heard this song?  It’s from England!”

They didn’t help things by releasing basically the exact same song on their follow up album “WYSIWYG”, only instead of “I get knocked down, but I get up again,” they say, “She’s got all the friends that money can buy.”   Then Rolling Stone’s Magazine listed it as number 12 on their list of 20 most annoying singles, stuck right between “Barbie Girl” by Aqua and that obnoxious techno-dance version of “Cotton-Eye Joe”.  At least Nickelback had a song higher on the list…

“Tubthumping” aside, Chumbawamba has actually been around for over 25 years, originally specializing in anarchy-punk.  One of their previous albums, fittingly titled “Anarchy” has a song called “Homophobia” coupled with a Tubthumping-sounding track that has the lovely title “Mouthful of Shit.”  “Mouthful of Shit” had such winning lyrics as “You think you’re God’s gift, you’re a liar/ I wouldn’t piss on you if you were on fire.”  Also, they used probably the grossest album cover ever.  You can see it here, but I warn you, it is VERY NSFW, and extremely gross.  But now you want to click the link, don’t you?  Well, okay, you can click it, and in the meanwhile I’ll put up a picture of Natalie Portman to cleanse your palate.

“Shhh…shhh…It’ll be okay…Just stare at my chest and everything will be fine.”

They described themselves in the early 90’s as “cowering under the broken wing of pop music,” and have some legitimately awesome songs on their album “Shh…”  And hell, their album Tubthumper actually had some top notch songs on it.  Or, at the very least, they were able to impress the hell out of me when I was in 4th grade. 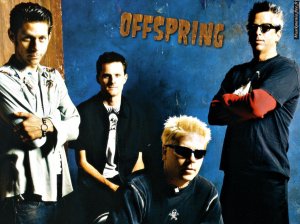 “Pretty Fly (For a White Guy)”, “Come Out and Play”, “Self-Esteem”, The fact that there are California Pop-Punk bands

Okay, just look at these fuckers. 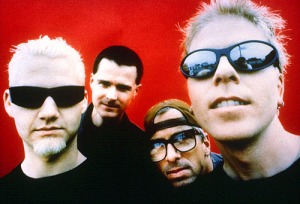 I chose this picture because it is one of the only pictures of the band where not EVERY band member is wearing sunglasses.  You’ve got, from left-to-right, a Swedish Nihilist, Ralph Finnes long lost brother, that camp counselor who touched me in the bad place all those years ago, and a lesbian.

They look like, and most likely are responsible for, ever single one of those lame kids on skateboards you knew in High School who always wore a backwards baseball cap, baggy jeans, and enraged old people sitting on porches.  Those kids were always douches, and Offspring was their favorite band in 1996 (but then they got so big and sold out, and if there’s one thing they say about Skeeter, its that Skeeter does NOT listen to sell outs!).

And this is their logo.

Well, I was a broody 8th grader once, and when you’re 14 years old and you’re listening to “Self-Esteem” or  “Why Don’t You Get a Job”, it’s kinda the most badass thing ever.  You make your parents play Smash in the car, and they take out the CD after two and a half songs and the tenth instance of the band screaming “fuck.”

Speaking of Smash, did you know:  that is the highest selling independant-label release of all time.  Kind of badass, right?

Also, if you do a google image search for them, you can find this picture.

So, that means they’ve gotta be  a little cool, right?

I mean…we’re talking about Eve 6 here.  Do you want to know how they got their band name?  Well, according to Wikipedia-

“The band’s final name is a reference to The X-Files. Tony Fagenson, a fan of the show, suggested the name after seeing an episode entitled “Eve“. The episode featured genetically engineered characters known as “Eves.” One of these genetically engineered characters, named “Eve #6,” made a remark about biting a guard’s eyeball, which Fagenson thought merited “Eve 6″ as a band name.”

Their songs border on emo lyrically, with their debut album featuring the track, “Shower”, which had the chorus of, “I loved you when he was in you in the shower/ Did in joy an ecstasy your eyes begin to water?”  Yeah.  Then, their lead singer was arrested for strolling around a hotel lobby with nothing but shaving cream on his junk. 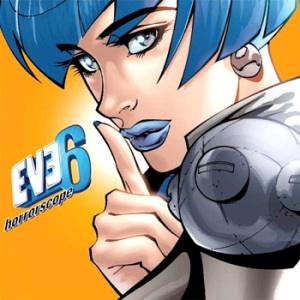 They even had to break up (they reformed in 2004) after sales of their third album, “It’s All In Your Head” were so low, the label dropped them.  Though, on the band’s official website, they claim that it was because the record label did nothing to promote the album.  So it’s gotta be that, right?

This album would have gone platinum if the fucking record label hadn’t made the “E” backwards, dammit!

Oh, one of the lyrics in the album?  “She never tells me what’s wrong/ Till she hits the bon-b-bon-bong”

Again, I’m gonna chalk this up to being a kid when I first heard their album.  It’s like food from McDonald’s.  No, it’s probably not very good on it’s own, but remember when you’d go on road trips with the family and would stop there for lunch and it seemed like the best food in the world?  It was a really nice break from all the horrific beatings, really. 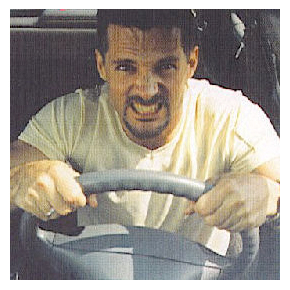 “Hitting you this whole trip has really made me hungry.  Want some McDonald’s?“

Plus, to be fair, their songs, when they don’t get languid and lame like their single “Here’s to the Night”, actually kind of rock out a bit.

Okay, I can tell, I’m starting to lose some of you.  Some of the earlier bands on this list, I’m sure you could chalk up to simply being guilty pleasures, but now it’s starting to get to be a bit much, isn’t it?  There might be no way I can get you back to trusting my tastes in music…well, what about… 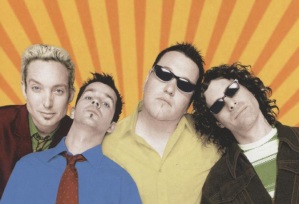 Back in 1999, “All Star” was fucking everywhere.  You remember how pervasive “Tubthumping” was?  It’s got nothing on “All Star”, a song that Smash Mouth’s lead singer openly admitted that, after recording the track, his first instinct was to forgo releasing it as a single, and instead, he wanted to sell it directly to advertisers.

Smash Mouth started off trying to be a ska-pop-punk band of sorts (Remember how different “Walking on the Sun” sounds from “All Star”?), two/thirds of these intended genres have a pretty strong “anti-sell-out” mindset attributed to them.

The song was the theme song to “Mystery Men,” while appearing in other classic works of cinema as Rat Race (where the band actually was seen on screen playing the song), Shrek, Inspector Gadget, and Digimon: The Movie. 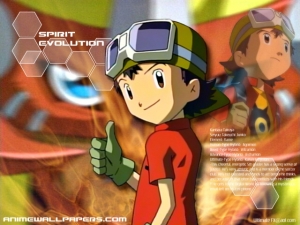 Now, I’m not going to go so low as to point out the 4 albums that followed Astro Lounge, which get increasingly poppy and…well, legitimately bad.  Their fourth album “Get the Picture,” which, I shit you not, had a song entitled “Seventh Grade Dance,” sold 33,000 units and led to the band getting dropped from their label.  And they’ve still released albums since then.

Did I mention that this was the cover of their fourth album?

There’s a reason why we only remember this band exists whenever they make another Shrek movie.

Okay, first of all, I’m going to say this.  I liked “Astro Lounge” a lot, despite the fact that it is pretty much glossy pop songs.  And I even dug about 1/2 of the songs on their third album, where they continued their downward spiral towards bad pop music.  But also, as weird as it is to think about it, the band used to be slightly edgy.  At least for popular rock music.

Their first album, Fush Yu Mang, was parental advisory and went double platinum.  The title comes from the band intentionally mispelling, “Fuck you, man.”  It had a song about a rich chick who ran away from home and became a prostitute, as well as a song about a guy committing suicide because he’s not as cool as the Fonz.

And even the songs on Astro Lounge, which, despite the fact that it came off as very kid friendly, had a song called “Stoned.”  And no, it’s not about biblical punishment (though, in retrospect, that’d be kinda badass) 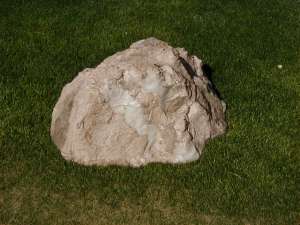 They also released a non-studio album called “East Coast Sessions” which included the uplifting anthem, “I’m Sorry About Your Penis.”  So, no matter what depths the band sunk into, they still had about two and a half albums worth of good stuff.

You might be familiar with their song “Leaving Town,” and if you aren’t now, you will be soon

Because of every single rhyme and line of lyric in this song.  Seriously.